We had such a great time on our trip to Costa Rica. We flew from Salt Lake -> Oakland -> LAX -> Liberia, Costa Rica. It was a long travel day but luckily we made all our flights and our luggage made it too. Remember I mentioned Allie got her first vomiting sickness which then spread to every member of my sister’s and my parent’s households? Well Scott was lucky enough to catch it and started throwing up as we arrived at the airport. By a miracle, he survived the entire trip. We met up with Scott’s friend from high school in LAX and had a blast with their family all week.

We landed in Liberia late so the first night we stayed in a hilton that was across the street from the airport. I was really impressed with the airport in Liberia. The new terminal just opened in 2012 so everything was new and modern. After a night’s sleep and a $16 breakfast buffet at the hotel we loaded up our rental car and headed to our next hotel near the town of Tamarindo.

We stayed in the JW Marriott Guanacaste and it was great. Our rooms overlooked the pool area which was really beautiful. When we arrived we spent the afternoon hanging out by the pool and relaxing. The pool was huge and sat right on the beach. 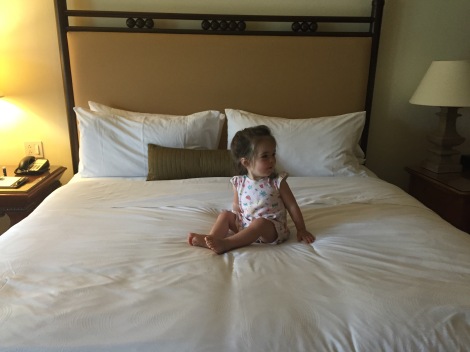 The next morning we drove in to the little beach town of Tamarindo to hang out at Playa Grande. We loved Tamarindo! It’s a charming little town lined with surf shops, boutiques, and small restaurants overlooking the beach. Playa Grande is known as being one of Costa Rica’s best surf spots. We didn’t do any surfing but did rent some boogie boards for the day. Scott still wasn’t feeling well at this point so he had to miss out. As with any beach, Allie’s favorite part was playing in the sand. Playa Grande was huge!! It was both long and wide. We paid for some chairs in the shade which made for a long walk to the edge of the water. 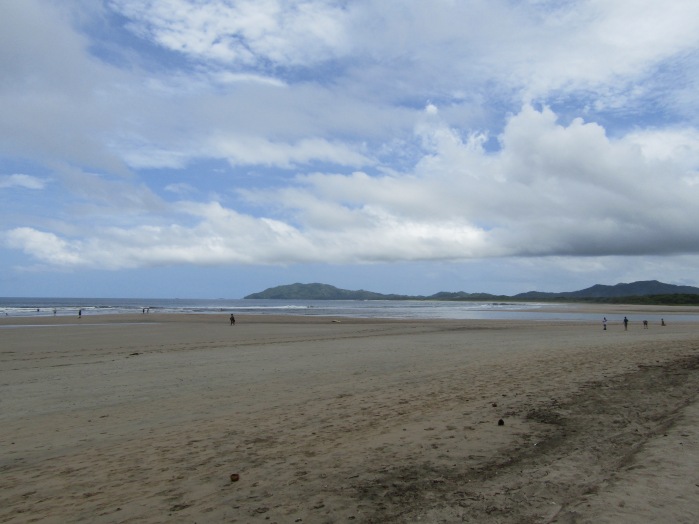 We walked through Tamarindo, went to the grocery store, and picked a place to eat lunch. I was very surprised at how well people spoke English. I was ready with my rusty Spanish skills but I never needed them. Everywhere we went people spoke English. Great English at that! That evening, after the girls had nice long naps, we drove back into Tamarindo for dinner. The people at the restaurant were in love with the girls! One of the staff even ran across the street to a gelato shop and brought back little cups of gelato for the girls. It was so nice.

The next morning we spent several hours hanging out at the pool. Allie isn’t totally convinced about the ocean but she LOVES the pool. She would swim all day long if we let her.

We checked out of the JW Marriott to head to our next hotel about 40 minutes away. On our way we stopped at Lola’s in Playa Avellanas for lunch. It’s a fantastic place right on sand. We sat facing the water and watched the surfers catching the waves. The food was great and the atmosphere was so much fun. 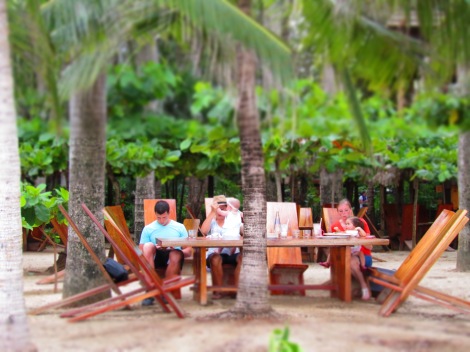 After lunch we drove and checked into our next hotel, El Mangroove. This was closer to Liberia but still on the coast. It was right on Playa Panama. I was little unsure about switching hotels but we were so glad we did! It was fun to get 2 different experiences. The beaches and terrain were very different from each other.

El Mangroove is SUCH a cool hotel. In the living area of our room the far wall was completely made of screen. There were not windows or glass closure, just the screen. You could lay in the hammock in the living room and hear the bird and howler monkeys with the fresh air. We just loved it! Then the bedroom portion was enclosed. I would definitely recommend this hotel. (I’d recommend the JW Marriott too!) 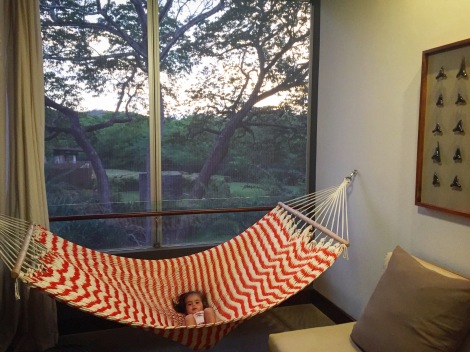 We arrived right as the sun was setting so after dropping our luggage in our rooms we practically ran down to the beach area to catch the sunset. I think when we turned the corner there was collective gasp from all of us. It was just so neat and beautiful. I’m so grateful we have the opportunity to go to such incredibly beautiful places and take in scenes that cause us to gasp. 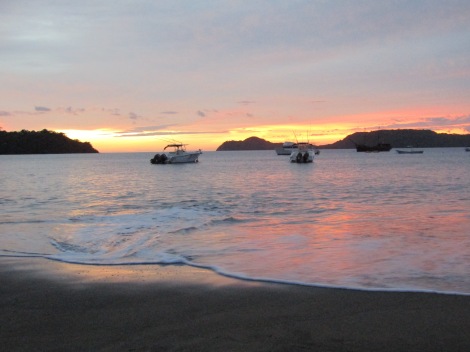 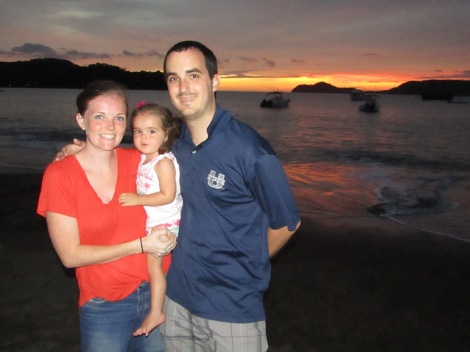 The next day we spent playing on Playa Panama and in the pool. I didn’t go into the water at the beach at the JW Marriott because of waves but Playa Panama was nice and calm. The sand was was great for building and digging.

Allie was pretty much obsessed with the pool at El Mangroove. It had an inclined entry instead of stairs and the entire area up to the hand rail was shallow enough for her to walk around. I think she loved the freedom! Once again, she would have stayed in the pool the entire day.

We headed into town, Playas del Coco, to find something to eat. Playas del Coco is one of the oldest beach communities in Costa Rica and it was awesome. There is a long sidewalk right along the water to walk or ride bikes. Lots of restaurants and sodas. A soda is a small diner serving Costa Rican dishes. The basic plate is called a casada which has your choice of meat, rice, beans, salad, potatoes, and plantain. At least that’s what the soda we went to included. And it was delicious!! Scott’s favorite thing was the strawberry fanta, aka kolita. One of my favorite things was the old, all-wooden highchair they had for Allie.

The next day was our most adventurous day as we made our way to Playa Penca. Luckily we were in a big car with 4-wheel driving making it possible for us to get there. You have to drive a few miles on dirt roads. Some stretches of the road were so uneven and some were right on the edge of a drop. I had to close my eyes numerous times because I was too nervous. There comes a point where you can no longer take the car. It was maybe 100 yards that we had to walk down the rest of the way. We had the babies in carriers so it was easy! Once we finally made it to the beach it was incredible! The sand was bright, the water was blue, and we were the only people in sight.

What made the drive so, so awesome was there was water on 3 sides of us. At the beach there were lots of trees for shade and we had a great time. It was well worth the trek. We got to do some snorkeling and enjoy the calm and quiet. We literally had the beach to ourselves, not another soul near. It’s amazing that this beach was only a few miles from our hotel yet the beach was so different. Playa Penca reminded of Caribbean beaches with the blue water and soft sand. I think this was my favorite spot on our trip. It was just so amazing! 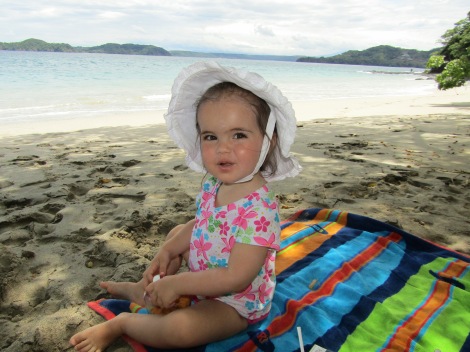 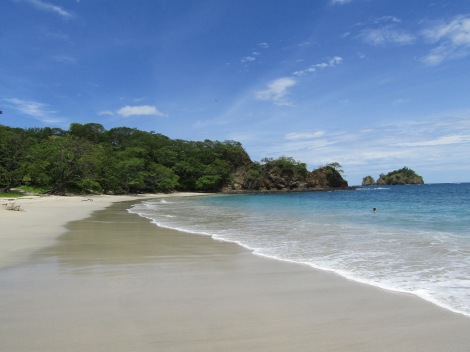 The hardest part about the whole thing was when we were ready to leave we had to hike up to our car with wet stuff which makes it so much heavier. It was my workout for the entire trip. I loved Playa Penca and would love go back someday!

Our trip came to an end and we headed to the airport the next day. Our route home was a little ridiculous. Liberia -> Houston -> Atlanta -> Kingston. I’m ready to stay off of planes for a little while!

Costa Rica was such a great vacation. We loved spending time with our friends that we rarely get to see. It is such a beautiful country with a diverse landscape. Driving was easy, the roads were in good condition for the most part, people were friendly, the language was not an issue at all. It was simply fabulous!!

Below is our video from the trip

WHERE WE HAVE BEEN

There was an error retrieving images from Instagram. An attempt will be remade in a few minutes.

This blog is intended to give a personal insight into our life in the U.S. Foreign Service. It is not associated in any way with the U.S. Department of State. The views expressed here are our own and do not reflect those of U.S. government or any of its agencies/departments.
Wright Outta Nowhere

Tales from a Serial Expat

The adventures of Cormac and Lauren

We travel, some of us forever, to seek other places, other lives, other souls. – Anais Nin

Absolutely, positively, not endorsed by the U.S. Department of State.

Handstand Around The World

towels packed, will travel
Well, That Was Different

Ideas, reflections and musings about how this wife and mother stays practically happy.....

Diplopundit
Weekends in Paris (or Moscow)

musings on living life in transition

Home is Where the Heart is

A life lived in a suitcase, plus some accompanied baggage.

food and life in the foreign service

Chimping around the world!

In Search of the End of the Sidewalk

Musings about books, baggage and a bit more