Unfortunately, we do not live on the beach. We don’t even live very near a beach!

I wanted to do a little geography for you because I don’t think many people know where Kingston is in relation to parts of Jamaica that you might be familiar with. I had no idea either!

Jamaica is the largest english speaking island in the Caribbean. Only Cuba and Hispaniola (Haiti/Dominican Republic) are bigger. It used to be a British colony so driving is on the left side of the road. Jamaica is made up of 14 parishes, Kingston is located in St Andrew.  Kingston is on the south east side of the island while the places you are probably familiar with are on the north shore; Montego Bay, Negril, Ocho Rios, etc.

1 – We are here. Kingston is the capital and largest city in Jamaica with over 900,000 people. The airport and some parts of Kingston are along the water but we are much further inland at the base of the Blue Mountains. 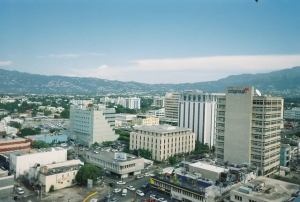 An area of town know as New Kingston

Along one of the main roads in Kingston

There are many people cooking up jerk chicken along the roads 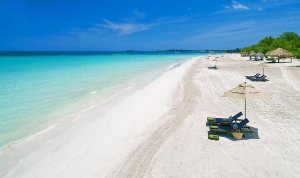 Yes, we live in Jamaica but it’s not like we are living at resort. However, we are very lucky that those amazing, breathtaking, paradisiacal places are only a few hours away. If we were still living in Idaho it would be comparable to driving to Provo and I’d way rather be driving to a world renowned beach than to Provo!!

One response to “So do you live on the beach??”

WHERE WE HAVE BEEN

There was an error retrieving images from Instagram. An attempt will be remade in a few minutes.

This blog is intended to give a personal insight into our life in the U.S. Foreign Service. It is not associated in any way with the U.S. Department of State. The views expressed here are our own and do not reflect those of U.S. government or any of its agencies/departments.
Wright Outta Nowhere

Tales from a Serial Expat

The adventures of Cormac and Lauren

We travel, some of us forever, to seek other places, other lives, other souls. – Anais Nin

Absolutely, positively, not endorsed by the U.S. Department of State.

Handstand Around The World

towels packed, will travel
Well, That Was Different

Ideas, reflections and musings about how this wife and mother stays practically happy.....

Diplopundit
Weekends in Paris (or Moscow)

musings on living life in transition

Home is Where the Heart is

A life lived in a suitcase, plus some accompanied baggage.

food and life in the foreign service

Chimping around the world!

In Search of the End of the Sidewalk

Musings about books, baggage and a bit more